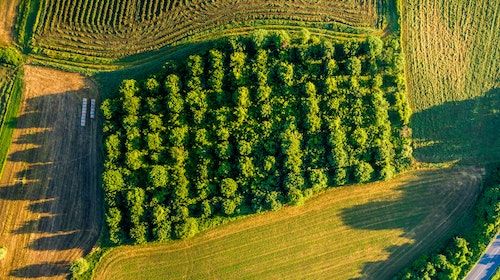 England’s Environment Agency is looking to hire 50 agriculture regulatory inspection officers following its failure to regularly check environmental compliance and enforce farming rules. Last year it was revealed that farmers could expect an inspection once every 263 years, the extra staff is expected to bring this up to once every 50 years.

Concerns have been raised over Natural England's new biodiversity net gain metric published earlier in the month. The algorithm used would classify wildlife habitat dominated by bramble, thistle and ragwort (common in rewilding projects), as degraded land despite being rich in wildlife. Connectivity between habitats has also not been taken into account.

Scottish farming, academics and environmental groups have taken part in an independent inquiry to help reach a consensus on achieving net-zero agriculture by 2045. Key recommendations from their report include whole farm contracts that deliver on farming and nature from 2024. The inquiry revisited principles of soil health and sustainable cropping from the 18th century.

An article in the Farmers Guardian covered the recent grant awarded by the Environment Agency’s Investment Readiness Fund to develop and pilot a UK Farm Soil Carbon Code. The funding was awarded to a consortium of farmers, academics, technology businesses and NGOs led by Farming and Wildlife Advisory Group South-West (FWAG) and of which the SSA is part. More about this work can be found here.

The New York State Senate has passed the Soil Health and Climate Resiliency Act intended to reduce the impact of agricultural practices on climate change by increasing adaptation and restoring soil health. A series of voluntary standards for soil health will be created by the New York State Department of Agriculture and Markets to guide strategic choices on farms.

A recent article in the Guardian explores the recent rise of the term 'regenerative agriculture’, the food world’s latest buzzword. Whilst there is no set definition, regenerative agriculture implies any form of farming that also improves the environment, with a typical focus on maintaining and/or restoring soil health.

New research suggests that feral pigs produce as much CO2 as 1.1m cars each year by uprooting soil. Modelling by an international team of researchers has estimated that pigs release 4.9m metric tonnes of carbon dioxide each year on a global scale by exposing microbes in the soil to oxygen, allowing them to reproduce at a rapid rate and produce carbon emissions.

The Prince's Countryside Fund has published a new glossary of terms aimed at farmers and growers to ensure a better understanding of farming and environment jargon. The booklet hopes to ensure that the ambitions around improving the management of the UK’s environment are accessible to all.