Soil Compaction: A Perspective from the South West

I have been working for the last 30 years in the South West dealing with runoff causing pollution and flooding, and have dealt with many soil problems over this period. Most of these have been at the more serious end of soil health and I have been trying to raise awareness and understanding about the scale of this issue, working with farmers and partners to find cost effective solutions. 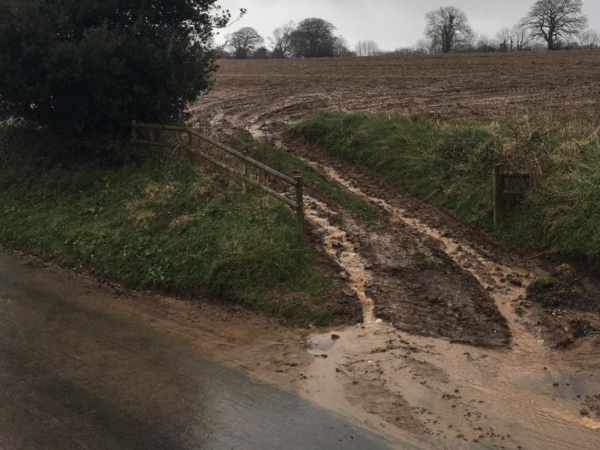 The soil landscape in the South West

Arguably the biggest risk to soils in the South West is rainfall. By this, I do not mean that heavy rain is causing erosion on bare land. The SW climate is influenced by the sea and has warm winters and high rainfall. The main problem with high rainfall is that there are very long periods where the soil has high moisture. Soil wetness is widespread with most areas having over 200 days at field capacity per year in Devon and Cornwall. North Devon has a period of about 250 days per year where soils are at field capacity. This is high when compared to soils in Cambridgeshire where the field capacity period is only 87 days.

The economics of farming has caused intensification and specialisation, and it always amazes me how farmers cope with farming the land in less than ideal situations. All land is at risk of compaction and in my experience there is a continual need for correcting inevitable soil compaction. Healthy soils can bounce back with biological activity but this can take time.

I have looked at thousands of soil profiles in the SW (no exaggeration), and have found soil compaction to be very common. This is because high risk crops are grown in our warm climate, for example maize and vegetables in frost-free areas which are often harvested late in the year and over the winter. Farms with high numbers of livestock can also cause soil compaction over large areas, whether this is from out-wintering or manure/slurry spreading in less than ideal conditions. In short, high soil moisture in the SW is a real challenge for farmers. The problem is of course not unique to farming. Development can cause compaction and this is common in urban areas.

Soil compaction often causes excessive muddy runoff. Sometimes the externalities can be serious, for example when runoff from a field, or several fields, floods nearby property. Serious muddy runoff can cause pollution with sediment or from other pollutants washed off the field. Although I deal with these problems every year whenever they are reported to the EA, I have never been too sure whether my experience of dealing with serious runoff is widespread and appreciated elsewhere in the country.

A typical example of serious runoff reported to the EA is one where there is a stream of muddy runoff flowing out of a gateway and into the nearby village and watercourse. In such cases I visit the landowner / farmer with one of our officers and carry out a soil assessment. This involves tracking the cause of the runoff back to the source, which invariably is a compacted field or part of the field.  I’ve seen just about every possible nuance of soil compaction causing runoff, including: late sown crops, compacted stubbles, headlands, compacted grass, fields with out-wintered stock, compacted soil in woodland, tracks and compacted land under development.

We have the legislation to deal with this serious muddy runoff, more so than I think is often realised. The Environment Agency can prosecute, serve notices, give warnings and give advice and guidance. Our approach is case-by-case depending on circumstance and scale. The new Farming Rules on Diffuse Pollution are a recent addition to our powers, and very helpful. A key metric for me that is defined in the Regulations is determining whether soil compaction causing muddy runoff is over 1ha in a single area, and whether this is at risk of entering a watercourse. This metric provides a practical benchmark for defining a muddy runoff problem associated with soil compaction. It does not necessarily mean that lower scale muddy runoff is not a problem but this yardstick does enable us to clearly define a breach in the Rules.

I always aim to work with the farmer to find a solution, and realise causing compaction is a reflection of the economic reality of farming that has to continue even during wet times when crops need harvesting, manures spreading and crops established in less than ideal conditions. I have learnt a lot from farmers over the years and realise there is no single magic answer. Context is everything. Taking reasonable precautions to prevent agricultural diffuse pollution is a requirement in the Regulations, and examples are provided that deal with soil. This requires us to understand good and bad farming practice in the context of the weather (including taking account of extreme events). Second time offences are likely to be treated more seriously, but everything is treated on a case-by-case basis.

Short term solutions often involve ripping the soil to remove compaction wherever possible. However, longer term economic solutions are needed to prevent the problems occurring in the first place - which is easier said than done.

The metric for measuring soil compaction and muddy runoff over 1ha is fundamental. It could be used in future monitoring programmes to determine the national extent of this soil problem. The metric provides the basis for a baseline regulatory standard applied to all forms of land management. However, there needs to be more awareness and understanding about this baseline, and importantly on developing economic long term solutions.