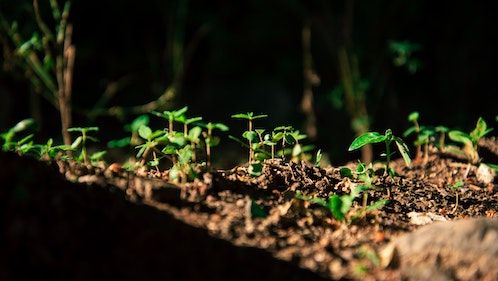 The virtual Global Symposium on Soil Biodiversity, hosted by the Food and Agriculture Organization of the UN, ran from Monday to Thursday. It aimed to highlight the role of soil biodiversity and ecosystem services in tackling environmental problems, and drive actions towards the implementation of the World Soil Charter and Voluntary Guidelines for Sustainable Soil Management. It included worldwide presenters, from scientists and practitioners, NGO representatives, civil society, indigenous peoples, local communities, to land users. You can find the various resources shared here.

A new study by Natural England reviewed the carbon storage impacts of England’s habitats. It concludes that healthy functioning ecosystems take up and store a significant amount of carbon in soils, sediments and vegetation, hence natural environments can play a vital role in tackling the climate crisis. Researchers state that reaching the UK’s net-zero target will require changes in how we use our land and coast.

On a similar topic, VistaMilk, the Science Foundation Ireland research centre focused on agriculture, has announced a €1.4m project with Dairy Research Ireland to measure the carbon sequestration potential of Irish soil. Researchers will use the new National Agricultural Soil Carbon Observatory’s carbon dioxide monitoring towers to explore the impacts of farm management practices on a variety of soil types.

On Monday, Prof. Bridget Emmett from the UK Centre for Ecology and Hydrology and member of the SSA Science Panel was interviewed on the BBC’s Radio 4 Farming Today programme, talking about the need to monitor and care for soils, emphasising that measuring soil health is not harder than measuring other natural resources. She calls for soils to have equal status to air, biodiversity and water "as one of our four major natural resources we need to look after for the next generation”. You can listen here (from 6mins 50).

In the US, research conducted by the Soil Health Institute, with support from Cargill, revealed that farmers engaging in soil health practices found a net income increase of 85% for those growing corn and 88% for those growing soybeans. 100 farmers across nine states were interviewed to measure the farm budget impacts of soil health practices, all having more than five years of experience with these practices.

50 Next, a new initiative launched by The World’s 50 Best Restaurants has identified a global list of young people shaping the future of gastronomy. This includes Abby Rose, co-founder of Farmarama Radio and co-creator of three apps for smaller-scale farms that support regenerative farming, including Soilmentor, aimed at helping farmers monitor their soil.

Scientists in Switzerland have sent thousands of pairs of white underpants to volunteers to bury them in their gardens as part of a project to examine the state of the country’s soil. A similar project is underway in Australia. The projects aim to find out more about the health of the soil’s biome, the richer the soil life, the more likely the underpants are to be degraded.