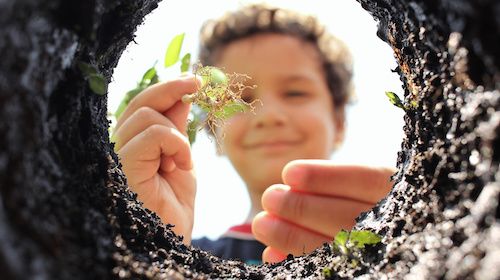 Following the Queen’s Speech on Tuesday, fears have been raised about a new Planning Bill that could undermine environmental protections. The bill will create a simpler and faster planning system and reforms will be made to the environmental impact assessment (EIA) regime. The SSA’s Sustainable Urban Soil Health Initiative (SUSHI) working group responded to the Planning for the Future consultation last year, highlighting the need for planning policy to address soil recovery and sustainable use.

The British Ecological Society published its report on ‘Nature-based Solutions for Climate Change in the UK’, presenting how nature-based solutions can tackle both the climate and biodiversity crisis. Soils are featured throughout the report as part of many habitats including woodlands, peatlands and arable landscapes due to their ability to absorb and filter water, support biodiversity, cycle nutrients and store carbon.

Recent research based on farmers interviews has found that recent extreme weather conditions are having adverse impacts on British agriculture, including soil run-off and erosion. The study shows that whilst for many farmers these changes to the weather are too uncertain and long-term for them to invest significant time or money in planning for them, others are building resilience within their business through actions such as to improve soil health.

Following last week's headlines on pesticides harming vital soil organisms, a new study published this week reveals the impact of 70 years of pesticide use on European soils. The research team emphasises the need to define and introduce regulations on pesticide cocktails to protect soil's biodiversity as well as taking into account the persistence of residues in organic soils.